What if I told you there was a Mediterranean country that has islands like Greece, fresh food like Italy, but without the high prices and overload of tourists? To put it into perspective, we ate out every meal, drove a Mercedes, had several drinks a day…

and I spent slightly over $50 a day. And that was us splurging.

A popular spot with Europeans, Croatia remains relatively unknown to most international vacationers. Why Croatia isn’t as well-known as Spain, Italy, etc. will forever remain a mystery to me. It offers the same, if not more majestic landscapes, vibrant towns, and people as warm as the weather.

Spring break was coming up, and two friends and I originally wanted to go to Morocco, but flights were too expensive. I had read online that Croatia was the underrated spot in Europe, and I prefer under-the-radar destinations. So, I suggested Croatia, which was met with some confusion. After one quick Google Image search, they were convinced; this was the spring break of the Croatia Road Trip!

Despite endless research, everything there blew any expectations I had out of the water. If there was one word to describe Croatia, it would be shocking.

The three of us stayed two nights in a booking.com apartment in Duborvnik for $100 total. Croatia is not on the euro, so accommodation can be pretty cheap; if you book well in advance, you can get an Airbnb in Dubrovnik with an sea view for $40-$60/night.

Like Italy and Greece, a majority of the food is Mediterranean with fresh seafood and produce, but cheaper. Croatia is also very well-known for their wine! On average, lunch cost me $7-10. Breakfast of a croissant and coffee cost me about $1.50.

How To Get Around

Everywhere we went in Croatia, aka the major spots (Zagreb, Zadar, Split, Dubrovnik), is mostly walk-able. Taxis can be expensive; a ride to the airport will probably run $40. Realistically, you probably won’t need any public transportation besides to/from the airport, which has a $5 shuttle bus. Taking a bus from Zagreb/Zadar to Plitviče National Park can run from $10-$15.

I took Croatian for 3 weeks online before coming here so I largely spoke (very broken) Croatian with the locals. Even knowing “hello” will likely take them aback and make their day!

We arrived in the capital, Zagreb, and picked up our car. We used Croatian Rental Cars and spent $40 per person, not expecting much. Instead, we ended up with a brand-new Mercedes! This was a welcome surprise, as we would be sleeping in there for 4 nights. We then drove 90 minutes from Zagreb to the Plitviče Lakes National Park. 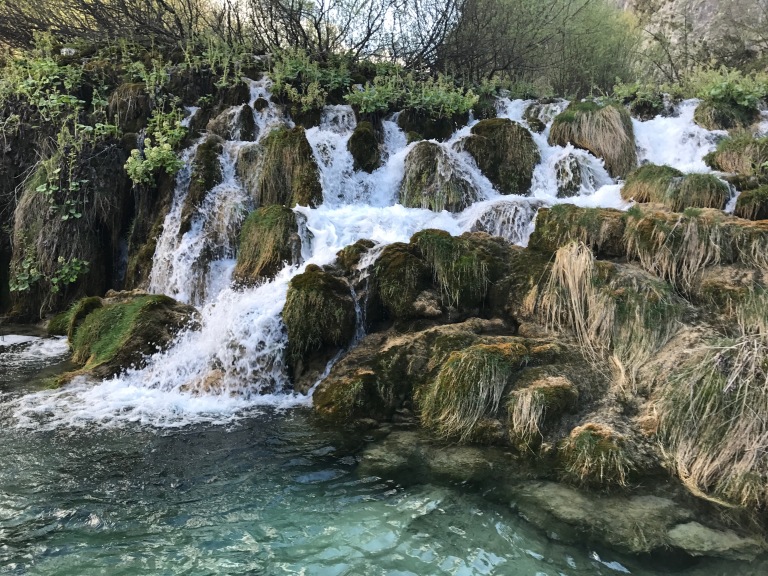 With 113 square miles (295 sq. km) of rivers, waterfalls, bridges, hiking trails, Plitviče is an outdoorsy person’s paradise; many actually camp out here for a few days. We went in early April, so the mountains weren’t as green as they could be, but the water was reminiscent of melted emeralds. Plitviče was the most magical and ethereal place I’ve ever been to. The entire time, I was expecting elves and nymphs to pop out to guide us around.

Our first full day, we took it slow because Zadar is very easy to do as a day-trip in a few hours. Zadar, by far my favourite name for a place, is a small, relaxing, coastal town populated by university students. We grabbed breakfast and headed to one of the ports of Zadar on Ulica Ante Kuzmantića and watched the old Croatian boatsmen sail out for the day.  For the afternoon, we primarily strolled along the People’s Square, ate some gelato and soaked up the sun that we’re so deprived of in Scotland.

In the afternoon, head toward the Zadar’s highlight, the beach-side promenade, known as the Sea Organ.When the waves crash on the Sea Organ there’s a built-in structure that creates music with the intensity of the waves! This is paired with the adjacent luminescent floor, the Greeting to the Sun.

“Zadar has the most beautiful sunset in the world, more beautiful than the one in Key West, Florida” – Alfred Hitchcock

The second-largest city in Croatia, Split is home to much of the nightlife and young energy of the country. Forgetting to research Split, You can imagine me being surprised (yet again) by the beauty of the city! Imagine Nice, France, with a Greco-Roman twist.

Spend your morning with an espresso on the Riva seaside boardwalk and watch the boats and overly-aggressive rowers on the Adriatic sea. After, further elevate your senses with the Riva street markets and take in the lingering aroma of freshly-picked lavender.

Split itself is mostly enclosed by Emperor Diocletian’s Palace. Walk within the palace walls and get a feel of the Ancient Roman life; a vast majority of the ancient architecture is still intact! One of the best meals in my life was a mussel and clam risotto here for $9. I wish I remember what restaurant it was, it still appears in my dreams. 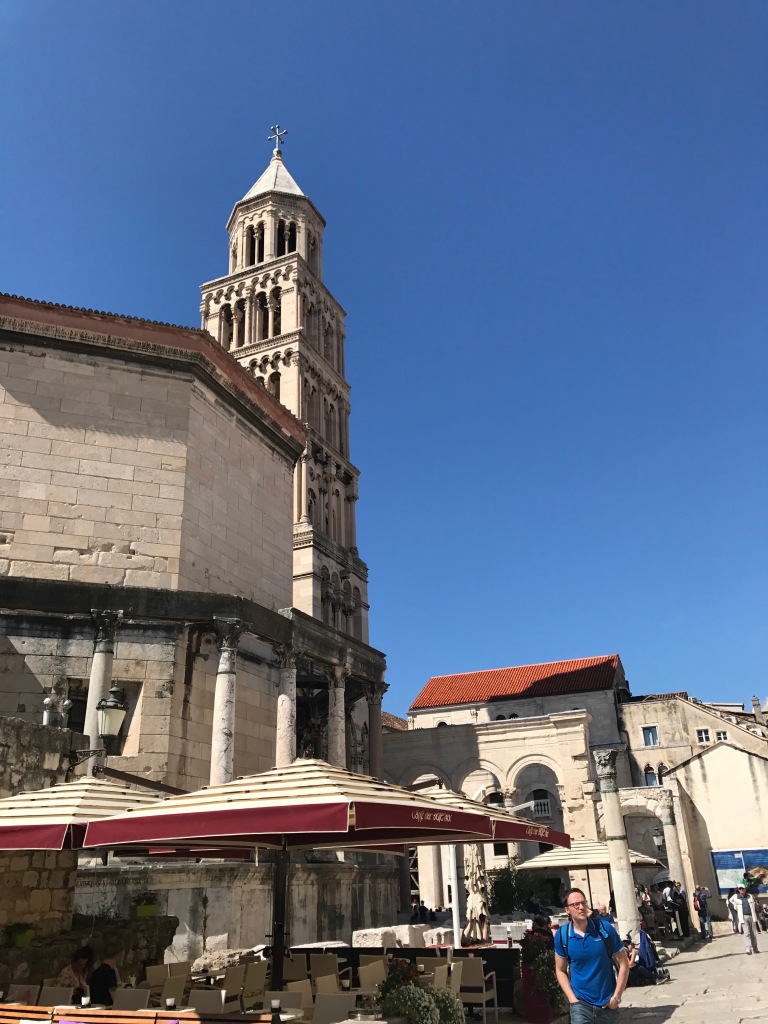 Our original intention for this day was to take a day trip to Mljet, probably the most famous Croatian island. However, when we arrived at the car ferry, we missed it and the next one was in three hours! Always one to take an opportunity for an extra stamp in my passport, I suggested we just go to neighbouring Montenegro for the heck of it. We can have breakfast there and head back to Croatia. At least that’s what I thought we would do.

Kotor is a tiny town of 22,000+ people, known for their feral cats. However, the community makes a group effort to feed, vaccinate, and take care of the cats as a whole. They even have a museum dedicated to them! A local told us there was a local cat lady in the 80’s who vaccinated and single-handedly took care of dozens of cats, effectively saving the community. Go to any gift shop and you can find postcards of her posing with the feral cats and cat-themed merchandise.

Dubrovnik may look familiar to Game of Thrones fans because that’s where sights such as the King’s Landing, Blackwater Bay, and most of these places are filmed. You can see the first two sights by climbing the Lovrijenac fortress at the edge of Old Town. 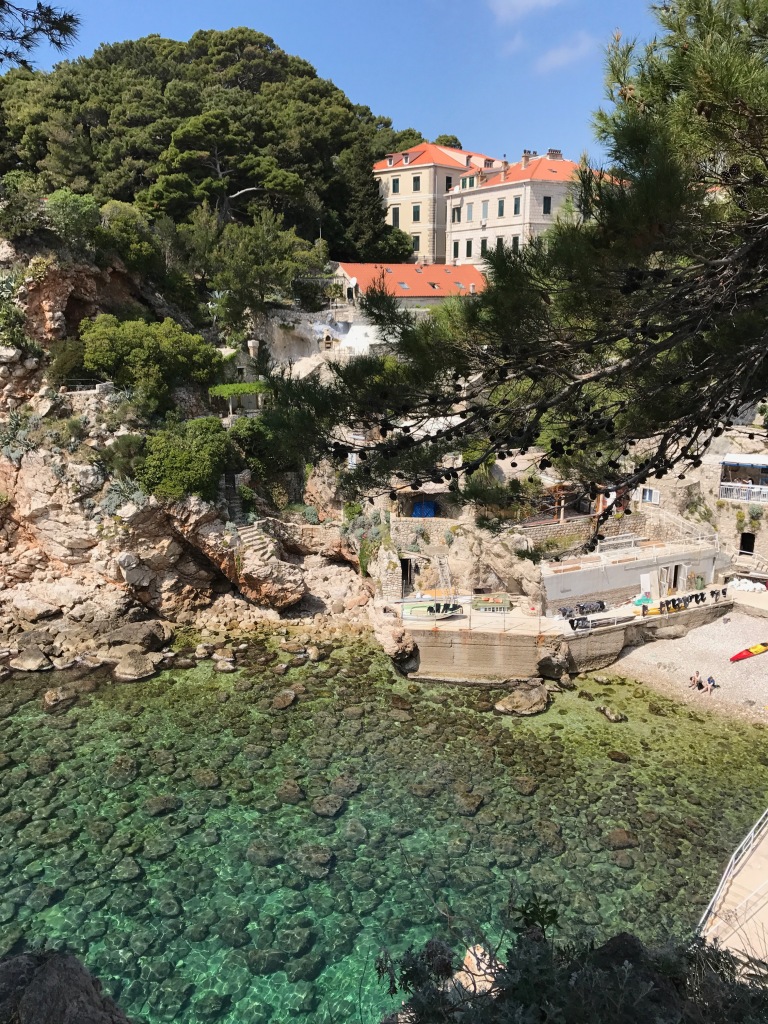 Pro-tip: when taking photos of an iconic sight, always look behind you! Sometimes you may get a pic like this!

We spent the afternoon immersing ourselves in the Typical European Experience: feeling spiritual (and grateful) at the Crkva Svetog Vlaha Cathedral, burning to a crisp at the Luza Town Square, and indulging in more light day-drinking.

Later in the day, we took the cable car up to Panorama, a touristy restaurant at the top of a hill that offers an unrivaled view of Dubrovnik.

See that island in the northwest corner of the last photo? That’s a free boat ride away to a rocky, vibrant island filled with wild peacocks, rock-hiking trails, and secret lakes.

We spent this day hiking around the island, climbing sideways around the rocks like I used to when I was little in Marina del Rey. We then took a dip in the crystal-clear but freezing Adriatic Sea. 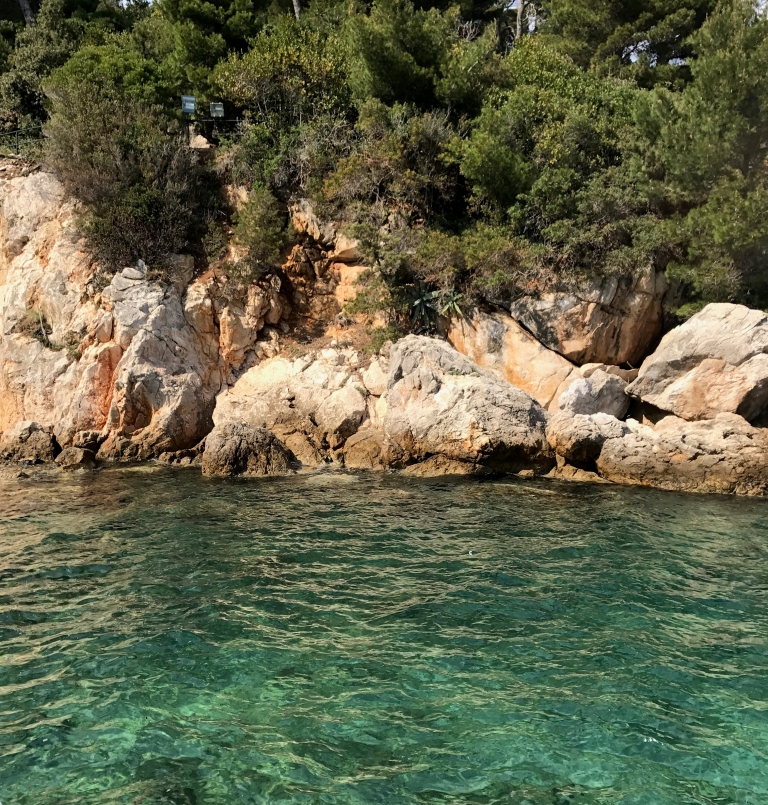 Restaurant with a view

With our final night of our road-trip, We went to Lokanda Peskarija, a restaurant on the dock. Somehow, appetisers, entrees, desserts, and wine only came out to $45 in total!

Day 7: Zagreb and Back Home

Our flight from Dubrovnik to Edinburgh had an 8-hour layover back where we started, Zagreb! As we didn’t get to explore Zagreb before, we took this time to explore the city. It was more Russia than Greece, without a trace of Mediterranean in sight.

We happened to be there on Easter Sunday, so the town was largely empty…until we went inside the churches. Christianity (in several denominations) has always been integral to Slavic culture, so it was so unique being in a Slavic country during one of the most important religious holidays!

Unfortunately 3 hours into our layover, it started downpouring, so we ran to a bus station and took the next bus back to the airport! I didn’t get much of an impression of Zagreb considering it was basically a ghost town for Easter, but I would go back for a day or two.

Have you been to Croatia yet? If so, what were things that surprised you? Let me know in the comments below!

A 20-year old university student who travels twice a month! I created this blog to help people out and give recommendations on how to get the most out of a trip and to express my pure love and passion for travel, and my growing love for photography. If you have any recommendations on what to blog about, let me know!

Havana, Cuba: The Forbidden Land
Put a Tulip On It: Amsterdam in Three Days